Perhaps one of the most confusing dilemmas confronting the prospective rhinoplasty patient is the choice of open versus closed rhinoplasty. These terms, while puzzling, simply refer to the two possible surgical approaches — that is, the access method used to temporarily remove the nasal skin and facilitate exposure of the skeletal framework. Since virtually all changes to the outer nasal contour result from corresponding changes to the nasal skeleton, the surgical approach, and the corresponding skeletal exposure it provides, has a direct bearing on the ease of surgery and thus, the quality of the rhinoplasty outcome. 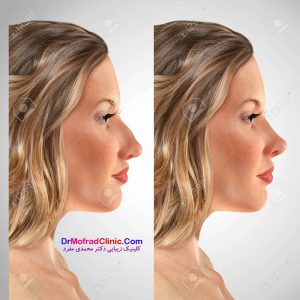 In the closed rhinoplasty approach, also called endonasal rhinoplasty, all of the surgical incisions are positioned inside the nostrils. Although parallel incisions encircle nearly half of the nostril lining, no part of the incision can be seen externally and a visible scar is avoided. However, because the right and left nostril incisions remain disconnected, repositioning of the nasal skin is difficult and the entire operation must be conducted through narrow surgical openings with limited visibility. Because access to the nasal framework requires vigorous stretching of the nasal skin, distortion of the nasal cartilage is also inevitable. While a visible scar is prevented, considerable challenges and technical limitations are associated with the relative lack of surgical access. Hence, closed rhinoplasty merely refers to the relative lack of surgical exposure associated with the endonasal approach.

Unlike the closed rhinoplasty, the open or external rhinoplasty approach employs a small bridging incision, called a trans-columellar incision, to connect the right and left nostril incisions. In exchange for this 4-5 mm visible segment, the nasal skin can be folded upward (similar to opening a car hood) and unimpeded visibility of the lower nasal skeleton can be achieved. In addition to direct visibility of almost the entire nasal framework, distortion of the nasal cartilage is minimized and individual components can be evaluated in their natural, undisturbed alignment. Thus, the hallmark of the open rhinoplasty is the vastly improved surgical access permitted by the trans- incision.

Although many aspects of an unattractive nose can be corrected using a closed rhinoplasty approach (thereby avoiding a trans-columellar incision), in my opinion, the modest risk of a visible columellar scar is more than offset by the improved accuracy, versatility, and effectiveness of the open rhinoplasty approach. While some rhinoplasty surgeons remain adept at the closed technique, particularly in patients with comparatively straightforward nasal anatomy, the advent of open rhinoplasty has truly revolutionized the treatment of complex nasal deformities such as cleft-lip rhinoplasty, twisted noses or severe post-rhinoplasty deformities. In fact, most rhinoplasty experts regard open rhinoplasty as the procedure of choice for difficult nasal anatomy of any type, and many of the most effective techniques of contemporary rhinoplasty can only be performed through the open approach.

For these same reasons, open rhinoplasty is also my preferred approach for primary (non-revision) rhinoplasty since it improves diagnostic accuracy and facilitates precision re-engineering of the misshapen nose. However, the technical demands of open rhinoplasty are rigorous, and substantial dedication and commitment to this approach are required to achieve consistently superior results.

In expert hands, the open approach offers a considerable technical advantage over closed rhinoplasty which more than compensates for the minimal risk of visible scarring.