+98 903 456 4026
Search for the word you want
?What should you do after rhinoplasty
Shortcut keys
Appointment Gallery Archives Ask the doctor

?What should you do after rhinoplasty

?what should you do after rhinoplasty

after rhinoplasty you need to rest in bed with your head raised higher than your chest, to reduce bleeding and swelling. Your nose may be congested because of swelling or from the splints placed inside your nose during surgery.

In most cases, the internal dressings remain in place for one to seven days after surgery. Your doctor also tapes a splint to your nose for protection and support. It’s usually in place for about one week.

Slight bleeding and drainage of mucus and old blood are common for a few days after the surgery or after removing the dressing. Your doctor may place a “drip pad” — a small piece of gauze held in place with tape — under your nose to absorb drainage. Change the gauze as directed by your doctor. Don’t place the drip pad tight against your nose.

In addition, don’t rest eyeglasses or sunglasses on your nose for at least four weeks after the surgery, to prevent pressure on your nose. You can use cheek rests, or tape the glasses to your forehead until your nose has healed.

Use SPF 30 sunscreen when you’re outside, especially on your nose. Too much sun may cause permanent irregular discoloration in your nose’s skin.

Some temporary swelling or black-and-blue discoloration of your eyelids can occur for two to three weeks after nasal surgery. Swelling of the nose takes longer to resolve. Limiting your dietary sodium will help the swelling go away faster. Don’t put anything such as ice or cold packs on your nose after surgery.

Your nose changes throughout your life whether you have surgery or not. For this reason, it’s difficult to say when you have obtained your “final result.” However, most of the swelling is gone within a year. 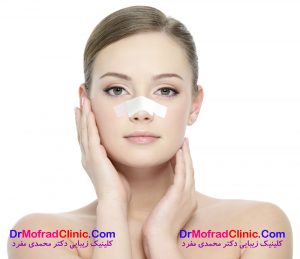 Very slight changes to the structure of your nose — often measured in millimeters — can make a large difference in how your nose looks. Most of the time, an experienced surgeon can get results both of you are satisfied with. But in some cases, the slight changes aren’t enough, and you and your surgeon might decide to do a second surgery for further changes. If this is the case, you must wait at least a year for the follow-up surgery, because your nose can go through changes during this time.

most people rate their pain between 0 and 4 out of 10.

?What should I look for in a surgeon

Plastic surgeons, facial plastic surgeons or otolaryngologists (ENT) perform most rhinoplasties. Training and board certification in one of these specialties is a good starting point. You’ll likely want a surgeon who often performs rhinoplasty.

You’ll likely want a surgeon with a good reputation among patients and other doctors. If your surgeon has published many papers in medical literature related to rhinoplasty and is invited to speak at educational conferences, that is usually one sign that their peers recognize expertise in rhinoplasty.

Make sure that your surgery will be performed in an accredited surgical facility or hospital. You likely should also feel comfortable with your surgeon. Look for a surgeon who can explain to you in understandable terms what is going to happen during your surgery.

18 January 2021 Articles
Questions to Ask Yourself Before Getting Rhinoplasty to guide you through all the considerations in order to select a final ...
Full view

25 August 2020 Articles
Cost of Eyelid Surgery or Blepharoplasty in Iran In this article we will discus around the cost of eyelid surgery ...
Full view

Cost of different types of eyebrow and forehead lifts in Iran

liquid facelift in Iran with Dr.Mohammadimofrad

What Is Endoscopic plastic Surgery (Keyhole)?